Skip to content
Home > Protein Guide > How Much Protein Is In A Single Egg White?

How Much Protein Is In A Single Egg White?

Although eggs are beneficial to one’s health, the cholesterol included in whole eggs and egg yolks can be harmful to certain people. Egg whites are a low-calorie, cholesterol-free solution for people who are sensitive to dietary cholesterol. Each egg white has just 17 calories. Consuming the whites offers your body with protein as well as vitamins that are essential for good health. 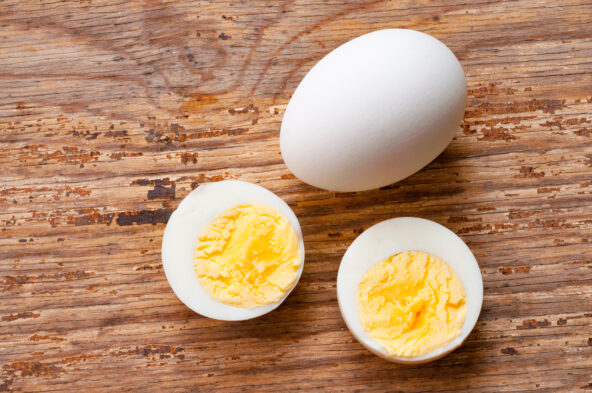 Protein is the most prevalent nutrient in egg whites. One big egg white includes 4 grams of protein, and the protein content accounts for around 85 percent of the egg white’s calories. Egg whites, like other animal sources of protein, contain all of the necessary amino acids your body requires. Amino acids are used to produce new proteins in your cells and tissues, and certain amino acids are also used to promote nervous system function. According to the Harvard School of Public Health, a single egg white offers around 5% of your daily protein requirements on a 2,000-calorie diet.

The time of day you ingest protein has an influence on muscle growth, according to a study published in the journal Cell Reports in 2021. Its findings show that eating egg whites around breakfast time will have a higher influence on muscle building than eating them later in the day.

“Although we commonly consider about protein’s role in muscle construction and maintenance, emerging research reveals that protein has additional advantages as well,” says the author “According to Kanter, who spoke to Live Science, “Since 2010, numerous studies have found that protein-rich breakfasts, including those containing eggs, result in blunted postprandial glucose and insulin responses, increased satiety, and lower energy intake at a subsequent meal, implying that eggs may play a beneficial role in hunger and weight management.”

High-protein breakfasts were linked to decreased evening snacking, as well as beneficial changes in “appetitive, hormonal, and neurological signals that affect food intake regulation,” according to a research published in the American Journal of Clinical Nutrition.

Riboflavin, or vitamin B-2, is found in egg whites. Riboflavin is required for a healthy metabolism since it aids in the digestion of food and allows your cells to create energy. Riboflavin also activates enzymes that defend you from hydroperoxides, a type of chemical that produces harmful free radicals that damage your cells. Getting enough vitamin B-2 activates enzymes in your liver, allowing your liver cells to cleanse your body properly. According to the Linus Pauling Institute, one egg white contains 0.15 milligrams of riboflavin, which is around 14 and 12 percent of the riboflavin consumption needs for women and men, respectively.

According to the University of Maryland Medical Center, one big egg white includes 54 mg of potassium, a key mineral and electrolyte linked to heart health, bone health, and overall good cell and organ functioning. According to Today’s Dietitian, potassium has been related to reduced blood pressure in several studies because it increases vasodilation (blood vessel widening).

In a study of 12,000 individuals published in Archives of Internal Medicine, those who ingested 4,069 mg of potassium per day had a 37 percent and 49 percent reduced risk of cardiovascular disease and ischemic heart disease, respectively, than those who drank 1,793 mg per day.

Protein-rich diets have been linked to a decreased incidence of hypertension, and evidence suggests that egg whites may be especially beneficial. Scientists at Clemson University discovered that a peptide termed RVPSL (a component of protein) contained in egg whites “reduces blood pressure almost as much as a modest dosage of Captopril, a high-blood-pressure medicine,” according to an animal research published by the American Chemical Society. It inhibits the body’s production of angiotensin-converting enzymes, which raise blood pressure.

Other vital vitamins are also present in little levels in egg whites. Vitamins B-3, B-5, and B-6, as well as vitamins B-1, B-9, and B-12, are found in trace levels in the whites. These vitamins, along with riboflavin, work together to boost your metabolism and nourish other tissues. Egg whites also include modest quantities of choline, a vitamin needed for nervous system function. Egg whites, on the other hand, provide a negligible contribution to your vitamin intake. 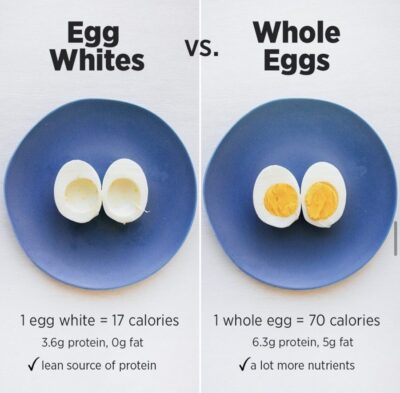 However, whether an egg yolk is healthier than an egg white has always been a point of contention. Both egg whites and yolks are beneficial to your health. Historically, it was thought that egg yolks were high in cholesterol and hence unhealthy for your heart. This myth has been disproved, as it is now commonly accepted that cholesterol in our food is not the major cause of excessive cholesterol in the body.

Our bodies need the protein included in egg whites to keep our muscles strong, maintain tissue, and boost our immune system. It also enables our cells to generate enzymes that are necessary for a healthy metabolism as well as haemoglobin, which aids in the delivery of oxygen to our tissues.

And if you’re searching for a low-calorie lunch to keep up with your workout routine, just eat egg whites (without the yellow component, of course). Because egg white is high in vitamin B-2, it provides essential elements to our bodies that aid in the digestion of food and assist our cells to manufacture energy, particularly after a workout.

Can Egg Whites Be Harmful?

While egg whites are a rich source of protein and a smart choice for persons with diabetes, high cholesterol, or cardiovascular disease, consumers should not believe that they give all of the nutritional advantages of whole eggs. “The yolk contains the majority of the vitamins and minerals,” Kanter explained. “Choline, vitamin B12, vitamin D, and iron are just a few of the nutrients present only in the yolk.”

Raw egg whites interfere with biotin absorption, according to a research published in The American Journal of Clinical Nutrition in 2002. According to World’s Healthiest Foods, biotin is a B vitamin that is crucial for fat and sugar metabolism as well as blood sugar management. Avidin, a glycoprotein found in egg whites, binds to biotin and allows it to be absorbed by the digestive system. Cooking egg whites solves this problem. Heat alters the structure of avidin, making it less able to attach to biotin, according to Healthline.

Both egg whites and entire eggs have the potential to infect people with salmonella when eaten uncooked. Cook all varieties of eggs until both the white and yolk are hard, according to the Centers for Disease Control.

According to the Mayo Clinic, some people are sensitive to proteins found in both egg yolks and egg whites, although egg white allergies are more frequent. According to the American College of Allergy, Asthma, and Immunology, up to 2% of children are allergic to eggs (ACAAI). ACAAI said that research reveal that roughly 70% of children with an egg allergy outgrow it by the age of 16. Allergic responses can vary from a minor rash to stomach ache to anaphylaxis, a life-threatening condition that affects breathing and puts the body into shock.