Skip to content
Home > Protein Guide > How Much Protein Is In Artichokes? Health Benefits

How Much Protein Is In Artichokes? Health Benefits

Preparing and eating artichokes requires a bit more effort than other vegetables. For one thing, its leaves feature prickly points that must be removed before eating.

These fiber-rich, delicious veggies, on the other hand, provide several health advantages and should be included in your dinner rotation. Artichokes are high in nutrients and are available in a variety of forms, including fresh, tinned, and marinated. 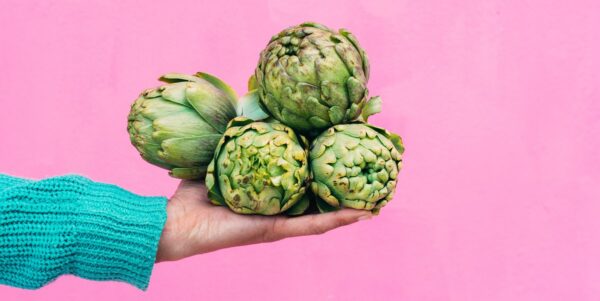 One medium artichoke (120g) cooked without salt has 64 calories, 3.5 grams of protein, 14.4 grams of carbs, and 0.4 grams of fat. Vitamin C, fiber, and potassium are all abundant in artichokes. The USDA has given the following nutritional information.

Artichokes contain only a little amount of fat (just under half a gram). Artichokes, on the other hand, are frequently eaten with melted butter or a creamy dip, which raises the fat level. Artichokes that have been fried or stuffed are likewise heavy in fat and calories.

The protein content of a medium artichoke is 3.5 grams. This is roughly the same size as a small baked potato or a cup of cooked broccoli.

Artichokes are high in fiber and a good source of vitamin K and folate, both of which aid in the production of red blood cells and prevent neural tube abnormalities.

They’re also high in magnesium, a mineral that aids nerve and muscle transmission and can help you sleep better. Vitamin C is also found in artichokes.

Artichokes may aid in the promotion of health and the prevention of certain illnesses and ailments due to their high fiber, micronutrient, and antioxidant content.

One medium artichoke has 7 grams of fiber in it, which is approximately a third of your daily fiber need. Fiber provides a number of health advantages, including a reduced risk of heart disease, stroke, and hypertension.

Potassium, a mineral that may aid to decrease blood pressure, is also abundant in artichokes. Potassium content of a medium artichoke is 343 milligrams (for reference, a similarly sized banana has 422 milligrams).

Artichokes may also help to keep your heart healthy by decreasing your cholesterol. Fiber, as well as some of the antioxidants found in artichokes, contribute to this impact. Artichoke leaf extract has been found to lower total cholesterol, LDL (“bad”) cholesterol, and triglycerides in studies.

Cynarin and silymarin are two of the most potent phytonutrients found in artichokes. These have a substantial beneficial impact on the liver, assisting it in the removal of toxins.

Artichokes include antioxidants, particularly vitamin C, that aid in the body’s battle against oxidative stress and inflammation. Many chronic and age-related disorders include these pathways. Vitamin C also aids in cell repair and immunological function. Another research released in 2018 looked at how artichoke chemicals have “anti-age” benefits on the skin.

Artichokes contain vitamin K, a fat-soluble vitamin that is essential for bone health and blood clotting.

Artichokes may have anti-carcinogenic qualities, according to research. Polyphenols”beneficial plant components with antioxidant properties”found in artichokes delayed the growth of breast cancer cells in a research published in 2015 (done on cancer cells in test tubes, not in patients). A 2015 research in mesothelioma revealed similar results.

Irritable bowel syndrome symptoms may be helped by artichoke leaf extract, according to early studies (IBS). Artichokes’ fiber can also help to reduce the risk of diabetes, obesity, and gastrointestinal problems like reflux, ulcers, diverticulitis, and constipation. Prebiotics, which encourage “good” bacteria and are crucial for gut health, are found in artichokes’ fiber.

Artichoke and similar plants in the Asteraceae family (including ragweed, chamomile, daisy, and sunflower) can cause eczema or hayfever, especially as an environmental allergy. Some persons who are sensitive to these plants have cross-reactivity with similar foods, such as artichokes, whether they are touching or eating them.

Side Effects Of Artichokes 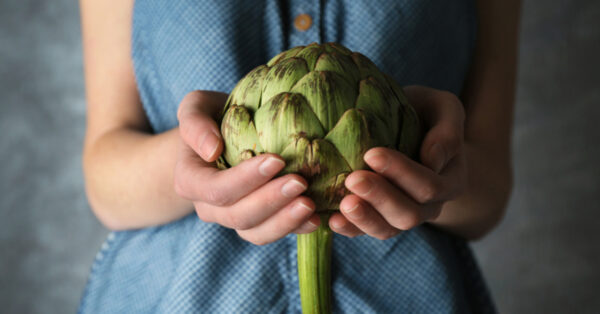 Vitamin K is found in artichokes. If you take Coumadin (warfarin), a common prescription blood thinner, it’s critical to maintain a constant vitamin K intake, which means eating roughly the same quantity of vitamin K-rich foods every day. To have a better grasp of your levels, speak with your doctor.

Artichokes come in over a hundred different types. They come in a variety of sizes, colors, and shapes, ranging from huge spheres to long, oval cylinders, and range in size from baby to giant.

The Jerusalem artichoke, sometimes called a sunchoke, is a tuberous vegetable that is not related to the leafy green “globe” artichokes.

You may also get artichokes in a jar, canned, or frozen state (usually just the hearts). Artichokes marinated in oil and vinegar, whether jarred or canned, are heavy in calories and salt. Look for artichokes that have been packed in water and clean them thoroughly before using.

California produces the majority of the artichokes in the United States. Spring is peak artichoke season, although fresh artichokes may be found all year.

Avoid artichokes with brown patches or broken leaves when buying fresh ones. Choose artichokes with densely packed, solid, and heavy-feeling leaves for their size. Fresh artichokes may be stored in a plastic bag for up to five days and should not be washed until right before cooking. Frozen artichokes may stay anywhere from six months to a year in the freezer.

How To Prepare Artichokes?

Trim the artichoke’s bottom stem and a few of the top hard-tip leaves to begin. Remove part of the rougher outer skin as well as some of the harsher outer leaves. Now it’s time to steam the choke.

Trim the bottom and top of the artichokes, as well as some of the tougher leaves, for filled artichokes. To remove the hairy, spiny component of the choke, use a spoon or paring knife to dig it out.

Follow the same procedure to sauté your artichoke: remove the choke, quarter the artichoke along the center, and sauté. Clean one artichoke and place it in water with lemon and ice to keep it green until you’re ready to cook it.

Salads, sandwiches, and grain meals all benefit from the inclusion of artichoke hearts. They may be used as a toast topping or a filling ingredient in soups. In egg and vegetable recipes, artichokes contribute color, texture, and satisfying fiber.

Is It True That Artichokes Are A Rich Source Of Protein?

These tasty thistles include just 60 calories and 4 grams of protein per medium artichoke, which is above average for a plant-based diet. To top it off, artichokes are one of the most antioxidant-dense veggies available.

What Are Some Of The Advantages Of Eating Artichokes?

Artichoke is a fat-free, low-sodium meal that is also high in important nutrients like:

Can You Eat Artichokes Everyday?

Daily consumption of artichokes is probably not a good idea for individuals who have stomach problems from them. Artichokes, on the other hand, are low in calories, high in fiber, antioxidants, vitamins, and minerals, and may be consumed on a daily basis by the rest of us.

Can Drinking Whey Protein Without Exercise Be Harmful
24 Hour Urine Protein Test What It Means And How To Treat?
Do We Need Added Digestive Enzymes For Digesting Whey Protein?
2022-04-14